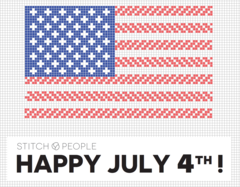 To celebrate the upcoming Fourth of July, I thought I would also celebrate one of our Stitch People fans! This photo of a completed work was submitted to me by Sharon Little, of New Hampshire. Impressive, isn’t it? I believe the finished work is around 24″ wide x 18″ high, at least! Sharon said it took ages to complete but was well worth it, as the final product is lovely.
This cross-stitch pattern by Rosewood Manor depicts the American flag using quilt-style squares to represent each of the fifty states. 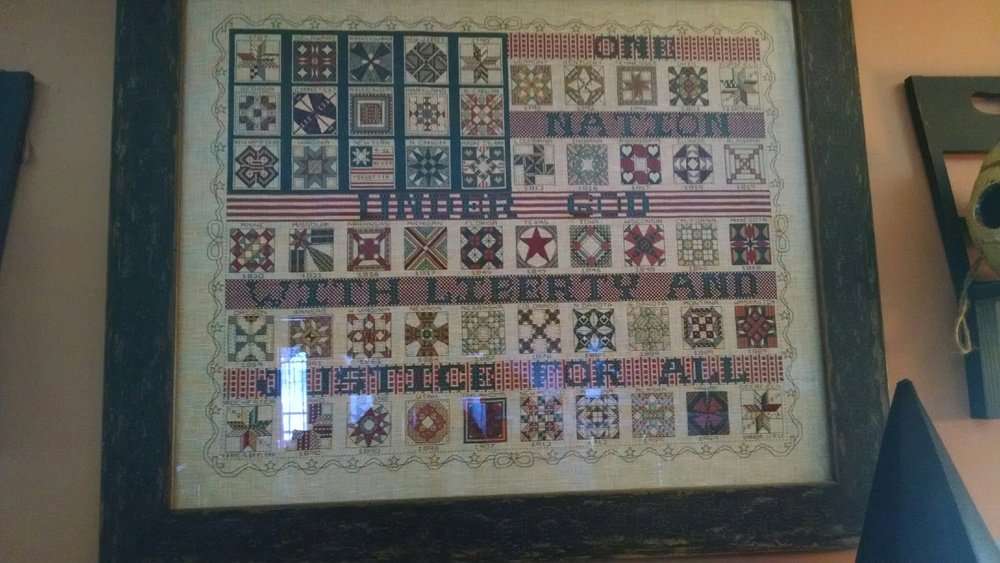 Here is what Karen (the designer at Rosewood Manor) has to say about this design:

“This sampler won Second place in the Woodlawn Plantation Needlecraft Contest  in 1999. I have always loved quilts and the fact that each quilt square has a name. There are so many stories that can be told using quilt squares. I designed this sampler long before the United States mint created the state quarters, but didn’t complete the design until much later.

The design shows the state quilt blocks arranged in the order the states were admitted to the union of the United States. The first thirteen states are shown in the blue section of the flag, plus one star block.

The other states are repersented in the stripes sections of the flag. Although this is a large piece of stitching, I do not think you will get bored! Each quilt square presents it’s own challenge and fun while being stitched.”

I, personally, really like Karen’s designs. I think they’re beautiful, classic, and many have a colonial twist – which speaks to my being raised in New England, so I’m a sucker for it!

Now, I like to cater to those who need smaller projects. Stitch People is great for getting-back-into-stitching stitchers, and need-something-quick, or wish-I-had-more-time-to-stitch folks. So to celebrate the Fourth of July, I created a small, contemporary American flag that measures just under 4″ x 6″. Choose your favorite red, white, and blue floss to complete this very simple pattern in your down time.

I’m so grateful for my freedom, for the founding fathers, and for the soldiers today who defend our country. Politicians come and go. Fads change. But the constitution and the principles of America remain – life, liberty, and the pursuit of happiness. Celebrate your country, this week, and go hug a veteran!